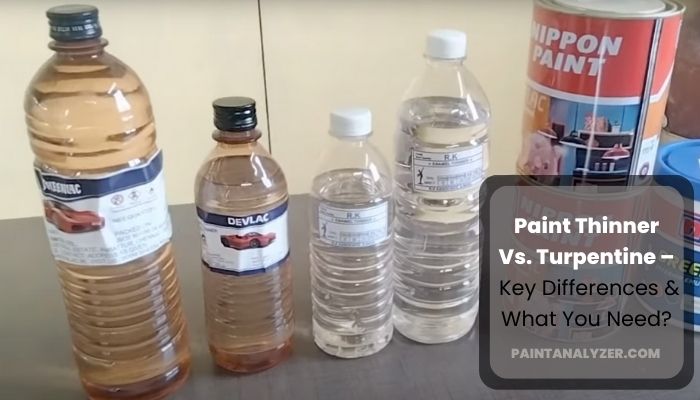 When it comes to painting, having the right products can make all the difference. Whether you’re doing a DIY project at home or a professional job in the studio, you need to know the difference between paint thinner and turpentine.

Paint thinner and turpentine are both solvents that are used to thin out oil-based paints and varnishes. However, there are some key differences between the two that you need to consider before you start your project.

Turpentine or Thinner: Understanding the Differences

When using either product, make sure to wear gloves, safety glasses, and a respirator. Thinner and turpentine are both used for thinning oil-based paints, but they are not interchangeable.

Can You Use a Turpentine Substitute to Thin Paint?

Turpentine is a solvent made from the resin of pine trees. It is used as an industrial solvent and as a paint thinner. Turpentine substitute is any other substance that can be used to thin paint.

There are many substitutes for turpentine, including mineral spirits, denatured alcohol, acetone, and kerosene. Each of these substances has different properties and should be used with caution. Mineral spirits are the most commonly used substitute for turpentine. They are less flammable than turpentine and have little odor.

Denatured alcohol is another common substitute. It evaporates quickly and does not leave a residue.

Acetone is another good choice for thinning paint. It evaporates quickly and leaves no residue. Kerosene can also be used to thin paint, but it is more dangerous than other substitutes because it is highly flammable.

Which is the Better Choice: Thinner or Turpentine for Removing Paint?

Recently, many people have been debating which the better choice between thinner is and turpentine for removing paint. It can be confusing to determine the right choice for a particular job. To help clear up the confusion, here we will look at the differences between the two products and examine the pros and cons of each.

Thinner is most commonly used for thinning oil-based paints and cleaning brushes and rollers. It is also effective for removing paint from metal and plastic surfaces, as well as for removing grease and wax from surfaces.

Turpentine is a solvent distilled from the resin of pine trees. It is a less refined product than thinner and is often used for cleaning paint brushes and rollers. It is also effective for thinning oil-based paints and removing paint from metal and plastic surfaces. However, it is not as effective as a thinner for removing grease and wax from surfaces.

On the other hand, turpentine is a less expensive option and is more effective for cleaning paint brushes and rollers. It is also less dangerous to work with than thinner, which can be flammable and emit toxic fumes.

Thinner is the better choice for removing paint from metal and plastic surfaces. However, turpentine is a good choice for cleaning paint brushes and rollers and is less dangerous to work with. Ultimately, the choice between thinner and turpentine will depend on the job at hand.

Can You Use Kerosene Instead Of Thinner And Turpentine?

Kerosene, thinner, and turpentine are all common solvents used in painting, varnishing, and other craft projects. Each of these solvents has different properties, and many people wonder if they can use kerosene instead of thinner and turpentine. The answer is yes and no.

Kerosene is a petroleum-based solvent that is most commonly used as fuel for lamps, stoves, and heaters. It can also be used as a cleaning solvent for removing grease and oil from surfaces. In terms of painting and varnishing, kerosene is not as effective as thinner and turpentine. It doesn’t dissolve certain resins, and it can leave behind a greasy residue.

Thinner is a general-purpose solvent that is used to mix paints and thin down varnishes and lacquers. It is also used to clean brushes and other painting tools. Thinner is generally more effective than kerosene, and it can be used in place of turpentine in most cases.

Turpentine is a stronger and more volatile solvent than thinner. It is used to dissolve resins and other stubborn materials. It is also used to clean up oil-based paints and varnishes. Turpentine is generally more effective than kerosene and thinner, and it should not be replaced with either of these solvents.

Turpentine substitutes can also be used for thinning paint, but in some cases, they may not be as effective or may produce a less preferable finish. Ultimately, the best choice between thinner and turpentine for removing paint depends on the type of paint being removed and the desired results.